A web app that warms up the floor heating industry

A heated floor is a reliable and increasingly popular solution for heating private houses and other buildings. codequest had the pleasure to cooperate with the nVent Thermal team and build an app with responsive web design for professionals who install the heating systems.

The product - installpro360 app - was presented in Gothenburg at Elfack, one of the most prestigious events in the Scandinavian electric industry. Installpro360 is continuously developed and introduced to new markets.

nVent Thermal was looking for a reliable partner who will not only build an app for the electrical installers of heating systems. The company also needed a software agency that understands users’ needs and obstacles while delivering a service and issuing a warranty. This is how nVent Thermal and codequest cooperation started.

The main challenge of the project was to create easy to use, mobile-oriented web app for floor heating installers, especially those who work on nVent Thermal products. nVent Thermal needed a clear and very intuitive UX / UI as the app was meant to be available on multiple markets. One of the key planned functionalities of the product was a feature enabling to create a virtual plan of the room where the technology will be installed. In the next step, based on the already inserted data, the app creates a complete list of all parts needed for completing the installation. Additionally, the app was going to enable Certified Pro program members to register all used parts and issue a 25-year warranty for the whole system. 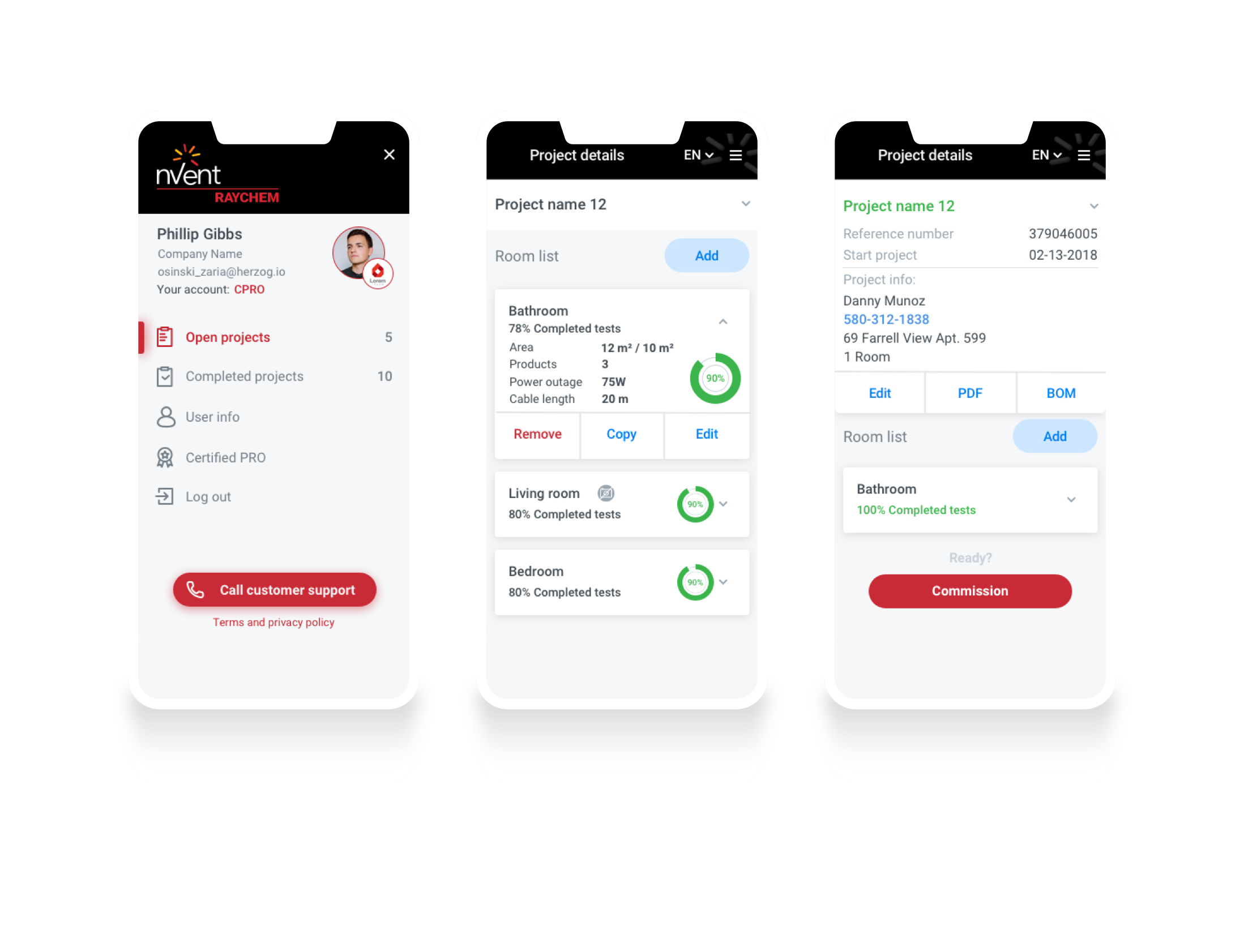 codequest was a nVent Thermal partner during the whole process of defining and designing the entire platform. Both sides wanted to create a stable product that will answer to all the needs of the electrical installer. To have a perfectly planned outcome, the teams went together through the Discovery Phase in the form of weekly call series. Insights gained during those conversations allowed codequest designers to create user stories, wireframes, designs, and clickable mockups. What is more, the idea was tested during the workshops with people who were potential users. Their feedback was extremely precious and contributed to overall product success.

When the visual and functional part of the app was planned and approved, it was time for development. The codequest team consisting of 3 devs and a Project Owner, used React on the frontend and Ruby on Rails on the backend. Over 60% of potential users preferred to access the platform via mobile, so codequest implemented the Progressive Web Application approach to ensure the best user experience.

The app was developed to speed up and simplify electrical installers’ work, so codequest created a cable selection engine. This feature allows checking what type of component should be used to optimize the heating parameters of the particular room. When the user inserts the details of the space, the app suggests the best type of cable or other product for this exact installation.

After only two months from the start of the development, the codequest team delivered an MVP version of the app. It was presented to the public in May 2019 at the biggest electric industry event in Scandinavia - ‘Elfac’ in Gothenburg. What makes that app innovative is simplifying the whole floor heating installing process and supports the nVent Thermal also in their marketing efforts. A stable and reliable platform contains all information on products that might be used and advises the best way to install it.

Write us today to get your free estimate!